Classic Stage presents worldwide known comedy The Importance Of Being Earnest written by Oscar Wilde. The play, directed by American director John Malafronte, premieres in D21 theatre on March 18 at 19:30. Performances on March 19, 25 and 26 will follow the premiere. The whole play is in English with Czech subtitles.

The Importance of Being Earnest, a witty, excellent comedy, tells a story of two friends in love with two women. The problem is that both women wish to be married to men named Earnest, and neither of the men have that name. Over the course of two hours, the entanglements pile up until the situation is resolved in a most improbable way.

Oscar Wilde’s 1895 play still delights audiences over a century after it first premiered. It has been a mainstay on stages around the world ever since. “I’ve chosen the funniest play I know to start with because I know, as an audience member, that what I need and want most after two years of Covid is a night out with family and friends to laugh out loud again. To celebrate a return to life in our great city,” comments John Malafronte.

Tickets are 375 CZK for general admission or 275 for students. To buy your ticket visit the link here: goout.net/en/the-importance-of-being-earnest/ezbling/ 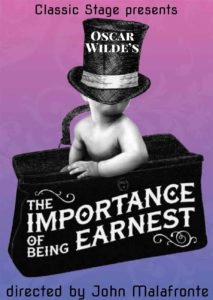