Prague Airport has received the 2020 Airport Service Quality Award, presented annually by the Airports Council International (ACI) to the best airports with the highest provable level of customer satisfaction with the services provided. Prague Airport has thus received the award in the category of 15 – 25 million handled passengers for the third time with the airports in Helsinki and St. Petersburg recognised in the same category.

“For the third consecutive year, we have received the best feedback from passengers passing through the gates of our airport. The awards confirm that we can ensure the high quality of our services long-term regardless of the level of traffic. The first two awards were won during the times of intense growth. The 2020 award shows us that not even the crisis associated with the spread of COVID-19 can prevent us from keeping our set high customer experience standards. Last year, we focused on implementing a number of protective measures with the goal of protecting the health of both passengers and employees,” Vaclav Rehor, Chairman of the Prague Airport Board of Directors, said, adding: “Big thanks are owed primarily to our employees, as it is thanks to their quality work, we can once again enjoy the received award.” 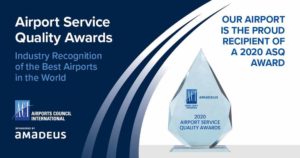 The Airport Service Quality (ASQ) programme is run by the Airports Council International. It is one of the world’s most prestigious initiatives focused on research and evaluation of customer satisfaction with services provided at the world’s most important airports. The ASQ results are published quarterly, representing an important gauge for participating airports with regard to their service development attempts and quality improvements. Prizes based on ASQ evaluation are awarded once a year.

By winning the 2020 Airport Service Quality Awards competition, Prague Airport service quality provided last year matched that of the airports in Helsinki and St. Petersburg, which also received awards in the competition.

At the beginning of 2021, Prague Airport also received the new Voice of the Customer award. The recognition is awarded by ACI to airports, which despite the demanding and unprecedented year 2020, caused by the spread of a novel coronavirus, took extra care of the comfort and safety of their passengers.

The Airports Council International (ACI) is a global industry association with approximately 1,930 member airports in a total of 183 countries around the world. It was founded in 1991 and its goal is to promote cooperation between members and other partners in the field of air transport.

European airports per individual categories recognised as the best in passenger satisfaction in 2020: