On the occasion of the 26th International Council of Museums General Conference ICOM Prague 2022, the National Technical Museum, the third oldest technical museum in the world, will host a meeting of CIMUSET (Committee for Museums of Science and Technology), hosting experts from technical museums and science centers from around the world, on Thursday, 25 August 2022.

This year’s meeting of CIMUSET at the National Technical Museum is an extraordinary event, as this year marks the 50th anniversary of the reorganization of CIMUSET, which was happened thanks to the initiative by the then Director of the NTM, Josef Kuba, in October 1972 in Prague. 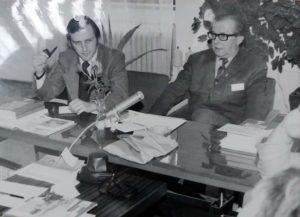 On this occasion, NTM Director General Karel Ksandr remarks: “This year’s meeting of CIMUSET in our museum is all the more precious to us because the NTM was founded as the third oldest technical museum in the world in 1862, when Vojtěch Náprstek laid its foundations in the form of the Czech Industrial Museum. The National Technical Museum almost as we know it today was administratively established in 1908 as the Technical Museum of the Kingdom of Bohemia. Thanks to the efforts of NTM’s then director Dr. Josef Kuba, the reorganization of the ICOM committee CIMUSET happened 50 years ago at the National Technical Museum, bringing together experts from technical museums and science centers from all over the world. It is a great honor for us that museum professionals from the world’s technical museums will reconvene at the NTM 50 years later, and we also appreciate the fact that the NTM was the venue for the opening ceremony of ICOM Prague 2022. These events emphasize that the NTM’s history and collections, but above all its activities in museology secure its spot among the world’s leading technical museums, such as the Science Museum in London or the National Air and Space Museum in Washington.”

In cooperation with the National Museum of Agriculture, the National Technical Museum also hosted the largest event of the International Council of Museums’ General Conference ICOM Prague 2022: the opening ceremony and joint meeting of participants from around the world on Monday, 22 August 2022.

The International Committee of Museums (ICOM), founded in 1946, is one of the world’s most important professional organizations in the field of cultural heritage care and acts as a major partner and consultant to UNESCO. The ICOM General Conference is an important opportunity for Czech museums and other heritage institutions to evaluate the work of museum professionals and the investments of their founders in cultural care, as well as to promote cultural heritage in and outside Prague. This is the first time that the General Conference will be held in a hybrid format and participants will be able to attend in person as well as online.

This event’s motto “Museums have the power to change the world around us!” responds to the current and ever changing social situation. The conference program includes over 500 lectures, discussions and workshops on four main topics as well as providing an opportunity to discuss and vote on several issues that the organization has been giving consistent attention to in the recent years, such as the redefinition of the museum. ICOM Prague 2022 will also address the impact of the war in Ukraine, with one of the panels dedicated to the protection of cultural heritage in Ukraine.

A the scientific and accompanying program prepared for the participants is varied. The National Technical Museum together with Czech Railways will send a historical train to Brno, carrying those interested to Moravia.

On Thursday 25 August, the NTM will host a meeting of three specialized international committees. On this day the museum will be closed to the public.