Charouz Racing System team is ready to compete in the FIA Formula 2 Championship for the fourth year. The 2021 season is going to start in Bahrain next weekend, supporting the Formula 1 Grand Prix for the first of eight rounds foreseen this year. The Czech squad will be on the grid with two new drivers, David Beckmann and Guilherme Samaia, at the wheel of their Dallara-Mecachrome cars.

Twenty-year-old Beckmann, from Germany, embarks in his maiden F2 campaign coming from the FIA Formula 3 Championship. In 2020, he took two wins, at Budapest and Silverstone, and five more podium finishes. Samaia will race his second season in F2 and the twenty-four-year-old Brazilian is motivated to take advantage from the experience already made with the car, the tyres and the environment. 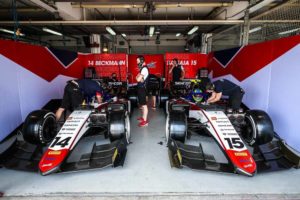 The biggest change for 2021 championship-wise relates to the weekend format, with three races instead of two. The Feature Race, the most important and rewarding one, is now scheduled on Sunday, after two Sprint Races on Saturday, one of which scheduled at night, something that is expected to be very choreographic for the spectators and demanding for the drivers.

Charouz Racing System, along with all other F2 teams, had the chance to cover useful track mileage between 8 and 10 March, during the official pre-season test sessions at Sakhir International Circuit. This is the same venue that will host the championship opener, making the preparation even more pertaining. Both drivers and engineers were satisfied with the collected data and are confident ahead of the race weekend.

Antonín Charouz, Team Owner
“We are undoubtedly excited to start the 2021 Formula 2 season, having two young and promising drivers who joined our line-up and a new weekend format to discover. The pre-season tests gave us good confidence for the first round in Sakhir, but we’re aware the championship will be very long. We want to proceed step by step, working with David and Guilherme to get the most out from every opportunity”.

David Beckmann
“I’m really happy to be on track for the first race of the season, we waited a lot for this. From last year’s test in December until the pre-season test I’ve not been in the car which is pretty hard for a racing car driver, but I’m really excited to start my first race weekend with Charouz Racing System. I’m happy with the atmosphere in the team which is the base to start work perfectly together, and hopefully, we can bring this feeling also in some good performance on track starting a nice season. Bahrain is also a nice venue to start the season, as we also have a good pace shown in testing and I also hope good opportunities to score some good points”.

Guilherme Samaia
“I’m super excited for the start of the new season, can’t wait to be back racing after the winter break. It will be interesting to see how this new weekend format will go, it will represent a new challenge for us as drivers, but also for the teams. After the pre-season testing done in Bahrain International Circuit I’m confident in the job done by Charouz Racing System, so we will see very soon where we are and I’m hopeful we will fight for big points”.

Kurzy ČNB
We use cookies to ensure that our website is as easy to use as possible. If you continue browsing our website, we assume that you agree to the use of cookies.I agree